So, despite the fact that I’m vegetarian, it seems to surprise people that Mike and I don’t eat a lot of pasta. I like pasta, but I can take it or leave it; bread is where it’s at! However, sometimes I really get in the mood for a hearty pasta dish, and lately I’ve been hankering for a fall-themed pasta. Autumn is really my favorite time of the year for cooking, because I love the flavors – winter squashes, apples, cranberries, maple, Brussels sprouts, pecans, I could go on forever!

Lately when I make pasta, it’s been pasta with a collection of vegetables plus a protein, with just a little oil instead of a sauce. I don’t really like heavily sauced pastas, since I think it tends to muck up the flavor of the other ingredients (except my penne alla vodka – that highlights the sauce!). As well, when I choose vegetables for a pasta dish, I like to have a variety of colors, especially red and green.

Racking my brain for fall flavors, I first came up with butternut squash, red bell peppers, broccoli rabe for the base vegetables. However, when I cooked the broccoli rabe, I struck out again for the third time in cooking this vegetable. I’ve tried it every which way – steaming, blanching then stir-frying, simmering in veggie stock…none of them seem to work for me. Luckily I had Brussels sprouts, one of my absolute favorite fall green veggies, in the crisper and the food processor was quickly put into use shredding a massive amount of sprouts. If you think you don’t like Brussels sprouts, give them a try shredded and sautéed. I’ve converted many people this way!

The steps may sound a little complicated, but it ends up just building layers of ingredients to toss together in the end. As noted, the squash can be done ahead of time, as can much of the vegetable prep. Once all of the separate parts are done, the dish comes together very quickly. It also can be cut in half, as I did, with the other half of the squash used for another purpose (soon to come – my Curried Butternut Squash Bisque, Lightened Up!). 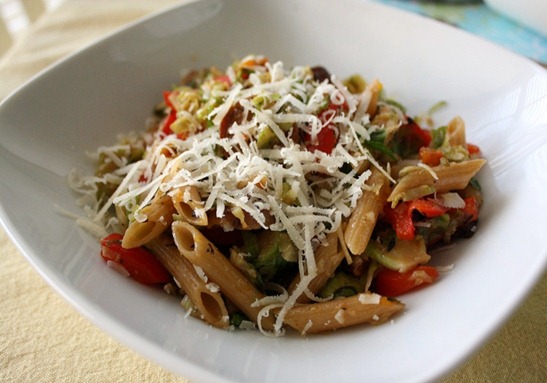 1 package of Tofurky Kielbasa, or your favorite veggie sausage, cut into coins

Cut the butternut squash in half, scoop out seeds (I set these aside for soup stock), and peel with a vegetable peeler. Cut into cubes, toss with olive oil, salt, and pepper, and roast on a large baking sheet until browning, stirring every 10 minutes. (This can be done a day before and refrigerated until ready to use)

Cook the pasta according to directions and set aside.

Heat 1 tbsp of olive oil in a large skillet over medium high heat, and cook the veggie kielbasa until browned, 5-10 minutes. Remove to a large serving bowl.

Heat 1 tbsp of olive oil in the skillet, reducing heat to medium, and add shallots. Cook until translucent, about 5 minutes. Add Brussels sprouts and a few tablespoons of water, and cover for 3 minutes. Remove cover, turn heat to high, and cook, stirring frequently, until the sprouts start to caramelize. Add julienned peppers and roasted squash, tossing quickly, and remove to the bowl containing the sausage.

Drain pasta when it is cooked al dente and fold into the vegetable mixture. Add walnut oil, salt and pepper to taste, and parmesan and pecans if desired.

Kathleen, you are so right. Many people think all vegetarians eat is pasta. It's wonderful to show them how much fun vegetarian foodies can have without pasta.