Lately, my favorite meal of the week has been brunch. It's a nice way of making Sunday feel a little more special, as well as giving me a day to look forward to rather than dread (because of Monday anticipation!)

This weekend we tried a new-to-us restaurant, Plaza Park Gardens in Winter Park. We've lived in Orlando for over 10 years now and I'm wondering why I've just noticed this restaurant, let alone visited it! Luckily we were able to snag a table for two in the atrium dining room, though they recommended that we make reservations next time because it does get busy.

The atrium is spacious, with artificial trees lit with white lights on strings, and a translucent ceiling that allows some sunlight through. The high was in the upper 90s that day, so it was nice to have the appearance of dining outside with the convenience of air conditioning! A gentleman was unobtrusively playing the piano in the center of the room, which added a bit of a romantic air to the atmosphere even though there was a steady hum of other diners enjoying their brunch. We were attended to by Robbie, who was just delightful, attentive without hovering, and answered every question we had (and I always have too many).

I selected the Sunday champagne brunch special, an appetizer, entree, and mimosas, while Mike decided to eat a la carte. I went with the goat cheese and beet salad, the grits-minus-shrimp-plus-mushrooms-and-a-poached-egg, and orange juice mimosas. (I was happily surprised to find out that they use Florida Naturals orange juice and Pom Wonderful pomegranate juice for their mimosas - the quality brands really made a difference!) Mike had the turkey, brie, apple, and bacon sandwich substituting provolone for brie, herbed fries, and an orange mimosa as well.
Each brunch entree is started off with a basket of mini-muffins, biscuits, and butter - regular and cinnamon. The butter was decoratively piped onto the plate and served softened - a very nice touch. The biscuits were pleasantly crumbly and tasty, though the muffins were a little bland. 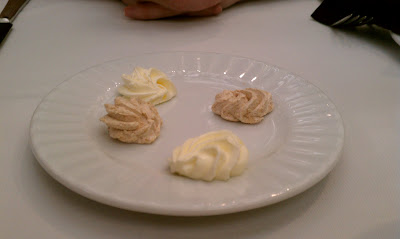 My beet salad was served on top of chopped mixed baby greens which had been tossed with balsamic vinaigrette and a touch of truffle oil. I appreciated that the greens were chopped; no large, unwieldy pieces of greens here! The goat cheese and beets were served a little differently than I have had in other restaurants -
cubes of beets mixed with goat cheese and formed into a cylinder. I wouldn't be surprised to find out that the cylinders of goat cheese and beets were pre-formed and stored to make serving easier, due to the utensil marks on the cheese. Even so, this was a delicious version of the salad and a large portion to boot. The
truffle oil gave just a hint of flavor, not enough to overwhelm the rest of the dish. My only other comment was that the ratio of cheese to beets was a little higher than I like, and I ended up picking out cubes of beet and leaving some of the cheese. 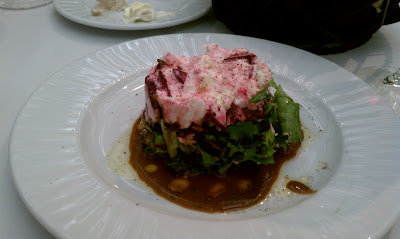 (I did forget to take pictures after this point, oops!)

My brunch entree was fairly amazing, with a large bowl of cheese grits topped with sauteed mushrooms and a perfectly poached egg, and two fresh drop biscuits with peppers. The grits were wonderfully creamy, seasoned just right, and were only made better when I stirred in the mushrooms and poached egg. Grits with a poached egg on top are one of my favorite breakfast dishes, and I can't imagine it executed much better than this.

I can't comment much on Mike's sandwich because of all the meat, but he loved the combination of flavors. The apples were thinly sliced green apples, which I was pleased to see because I think their flavor and texture suit a sandwich more than mealy Red Delicious. The croissant was nicely toasted, which I don't see often on restaurant sandwiches. I did sample his french fries, which were a little thick and perhaps a bit under done and under seasoned, though that didn't stop Mike from eating them all.

Overall we had a wonderful time at brunch at Plaza Park Gardens, from atmosphere to service to the food. There were plenty of vegetarian choices, and our server didn't bat an eye when I asked to modify a non-vegetarian dish. PPG will definitely be going on my list of brunch do-agains!
Posted by Kathleen at 7:06 AM