While it’s a ubiquitous item on many American-style restaurants today, the “Chinese” chopped salad is one thing I miss being able to order when I eat at restaurants since going vegetarian. More often than not it was a fresh-tasting salad with lots of vegetables, protein, and what Mike and I love to call “crunchies” – the fried noodles.

Luckily it’s also something that’s easily made at home. It’s a great post-gym meal because with this version, it can be thrown together in a matter of minutes. I keep the fried noodles but use just a few of them, broken up, and add toasted sliced almonds to boost the crunch factor. I like to toss in whatever extra vegetables I have in the refrigerator as well – red peppers, cucumbers, thinly sliced zucchini. However, I have to admit that I’m not a huge fan of the mandarin orange slices, so I do omit those but add unsweetened coconut shreds and a tiny squeeze of dark honey.

I use coleslaw mix partly because of convenience, but also partly so that the leftovers can be saved. Add the fried noodles at serving time if you’re going to be making this ahead of time. 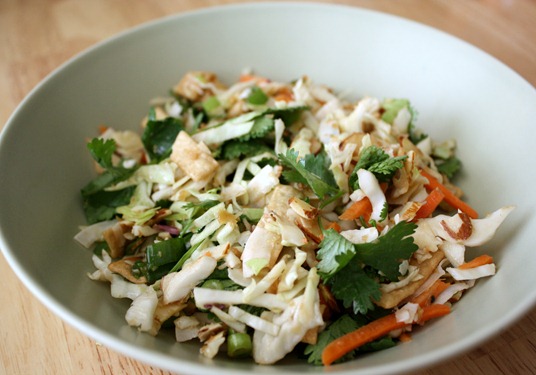 Asian-style dressing of choice to taste

Cook chick’n scallopini as directed in a non-stick skillet.

While the chick’n is cooking, combine remaining ingredients in a large salad bowl and toss. Divide between four plates and add sliced chick’n.

Since this salad isn’t made with delicate lettuce, leftovers can be refrigerated and served at a later time. If this is desired, add fried noodles when the salad will be served.