When I was young, I liked corn – I even would mix corn kernels in with my mashed potatoes on my dinner plate to make what I called “corn mashed potatoes.” Very creative, I was.

For some reason, I stopped liking corn for a long time. Then in college I decided to force myself to like the last few veggies that I hated: corn, green beans, asparagus. I just made myself eat them over and over, in different ways, until one day I loved each one. I’m not sure if this is a technique that would work for others, but I’m glad I did it to myself – I wouldn’t have discovered the beauty of caramelized corn kernels.

I’m not sure exactly when I first browned corn at home, but I do know that it was a small life changing discovery for me. While barely steamed or boiled corn is quite nice itself, I think that browning corn over high heat really brings out the best flavors.

I usually call this esquites when I’m making it, it is a little different from traditional esquites in that I don’t add mayonnaise – I tend to be one of those anti-mayo people! Esquites is a Mexican street food that usually consists of corn kernels, lime juice, mayonnaise, chile powder, and crumbled fresh cheese served in a cup. I much prefer it minus the mayonnaise because I think the mayo tends to muddy the fresh flavors of the corn, lime juice, and cheese; it also tastes lighter and you can eat more of the beautiful corn!

This is best made with fresh corn shaved from the cob in season, one of the great things about it is that frozen corn can stand in for fresh all year round. Unlike some frozen vegetables (broccoli, I’m looking at you), corn tends to hold its structure and sweetness when frozen (as well as its nutrition, but that’s true about pretty much all frozen vegetables). You can make this with fresh corn in August or frozen corn in March and it’ll still taste pretty darn good.

The cilantro is optional because I know there are some unfortunate people out there who taste soap when they eat cilantro! 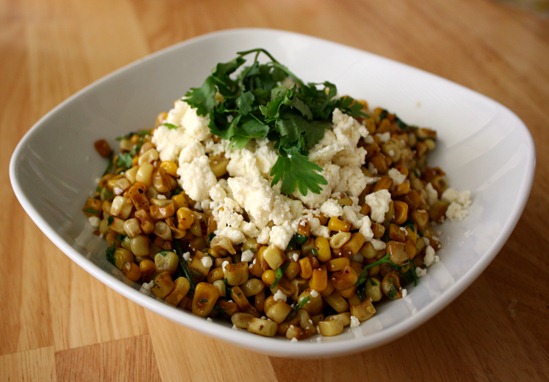 Salt and pepper to taste

Cut the corn kernels from the cobs over a shallow bowl or plate to catch the corn “milk.”

Heat the peanut oil in a large stainless steel skillet until the oil is shimmering. Carefully add the corn to the skillet and cook until most of the kernels are partially browned, or 5 minutes, stirring every minute. (Note: if you are using frozen corn, cover the skillet for about one minute after adding the corn to allow the kernels to defrost, then remove lid.) Keep a small amount of water next to the pan in case it browns too quickly and you need to deglaze the pan while the corn is cooking.

Stir in peppers and cilantro and turn off heat. Pour the lime juice over the corn to loosen the fond from the bottom of the pan. Add salt and pepper to taste. Sprinkle queso fresco over the corn and serve.