…aka the “Don’t Judge Me” salad. I stumbled upon this idea one time after we had people over for a barbecue. Mike and I don’t keep potato chips around the apartment to keep away temptation, but when we have some left over from having company, we feel obligated to use them.

One day last year I was making a “buffalo chick’n” chopped salad and though I usually toss in slivered or sliced almonds for a bit of a crunch, I thought to add in a small handful of crushed potato chips instead. Slightly less healthy, but wow, what a change in flavor! I only added 1/2 oz of chips for a single serving, but it made a nice change of pace for one of my favorite quick salads. To balance out the addition of chips, I try to use a lower fat salad dressing and plenty of veggies.

This weekend we had a few people over, and again have some chips leftover, so I rummaged around and put together a new version of this salad. I also gave it a quick name and decided to commit it to a recipe! It’s honestly not that unhealthy, 1/2 oz of potato chips is only about 60-80 calories, but it’s so tasty that we have to be careful about portions.

This idea can be extended to pretty much any type of chopped salad, just change the chip type accordingly! I had Kettle Sweet Onion chips and paired them with other ingredients I thought would go well. With the buffalo chick’n salad, I’ve used barbecue flavored chips and sour cream and onion chips with great success. 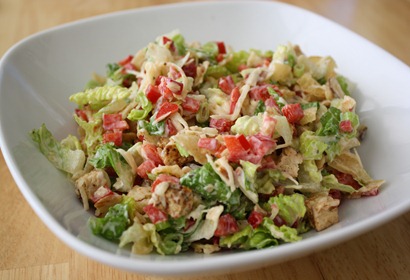 Spread the mustard over both sides of the Gardein chick’n and cook in a nonstick skillet according to directions.

Combine the remaining ingredients and toss well. When the chick’n is cooked, chop into small pieces and combine with the salad. Add a little cracked pepper on top and serve.

Substitute the mustard with your favorite hot sauce and the Swiss cheese with cheddar or blue cheese for a “buffalo” flavored salad.

This is why you need to come to Dandy and try the Giddy Up salad! spring mix, blue corn chips, chili, cheese, scallions, tomato and a garlic tahini sauce. SOGOOD! I like throwing a little crunch into my salads at home, too. Usually it's in the form of nuts, like you originally did, but chips are also welcome!