One of my favorite things about autumn is all of the fantastic flavors that are available and how well they come together and make some of my go-to recipes. Once I discovered I liked beets, they’ve become one of my favorite fall flavors. The arugula idea came from one week when I had a bunch of arugula and no ideas, so I tried out making a pesto with the greens. The peppery flavor paired perfectly with the sweetness of the beets and the richness of the goat cheese, and a new recipe was born!

Now, I admit that beet and goat cheese salad can be somewhat cliché these days, but I’ve converted quite a few people into liking beets with this recipe – even my dad, a confirmed beet-hater. The golden beets are milder and have less of the “soil” flavor that turns many people off, and the best part – they don’t stain fingers like red beets do. As well, this recipe takes advantage of a very easy way to peel the beets. Simply trim the root and greens, wash well, wrap in foil, bake, let cool, then wipe the peel right off with a paper towel.

This recipe can also be made with red beets, which I often do if it’s just Mike and I, since I’ve convinced him to at least somewhat like red beets. But anytime I’m making it for someone new, I always use a mild beet. Candy cane beets are also a mild variety of beets, but can be harder to find.

This salad can also be arranged any way you’d like, just sliced and placed on a plate, or molded into a timbale to make it a bit more fancy. The entire recipe can be served on top of a bed of greens tossed with a mild vinaigrette to make a more substantial salad. 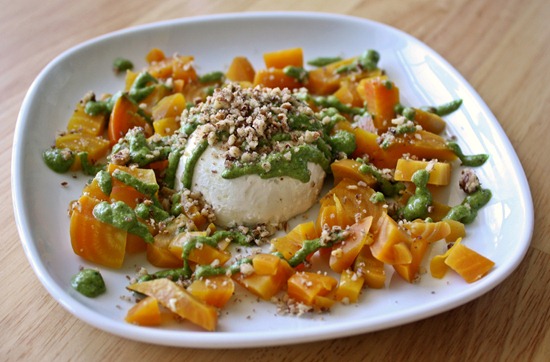 Serves 4 as a first course or 2 as an entrée

Salt and pepper to taste

Preheat the oven to 375 F. Trim and wash the beets well. Wrap individually in aluminum foil, place on a large baking sheet, and bake in the oven for 60-90 minutes, depending on how large the beets are. Remove from the oven and allow to cool. Once cooled, peel each beet by wiping off the peel with a paper towel. This step can be done up to two days before, refrigerating the beets once they cool.

Chop the arugula coarsely and wash well, as arugula may contain a lot of sandy soil trapped in the leaves. You may have to wash three times to remove all of the sand.

While the arugula is being washed, add the pecans, Parmesan cheese, and garlic to a food processor. Pulse several times or until everything is finely chopped. Add the washed arugula in batches, pulsing in between. Turning the food processor on, slowly stream in the oil until the mixture has a smooth consistency. If it is too thick, add water to thin. Add additional garlic to taste, if needed, and add salt and pepper to taste.

This sounds awesome. I have to see if we can find golden beets around here

You have both oz and cups as measurements, if I want to convert the oz can I just eyeball it?

Thanks Alex! Any beet works, too, but try the milder ones if you don't like the red ones.

And Nina, yep, you can eyeball everything here, it's pretty much what I do and then figure out how much I used. I generally use ounces when it's easier to go by weight (like, I have a block of goat cheese and a block of Parmesan) and then cups for the liquids and nuts. The Parm would be about 1/2 cup and the goat cheese... maybe 1/2 - 3/4 of a cup.

Beautiful salad! The first time I tried goat cheese and beets in a salad was when stole a few bites from Adam's salad at the Sunshine Seasons Cafe in The Land at Epcot, and I'm so glad I did. :D