Now it’s been my turn to get sick! At least I got my flu shot earlier in the year, so hopefully I don’t get the death flu this year. A couple days late due to sickness and then my computer dying yesterday, but I have two recipes just in time for Thanksgiving.

Mike and I have settled into a routine where we visit his family for Thanksgiving and my family for Christmas. Since his family always has dinner at home, I bring a few of my own things down; it’s a large but very, very laid back gathering and no one cares as long as they get to bring their usual dishes. (As an aside, one thing I don’t get is having the same meal/recipes each Thanksgiving, but I like variety!)

This year I’m bringing down a Field Roast Celebration Roast (look at all those amazing food-service only products on their site!); pecan, sage, and cherry stuffing; vegetarian gravy; Brussels sprouts, and a lightened up version of my spinach and artichoke dip that I still have to work out. And some kind of sangria or mulled wine, of course. In the photo below you’ll see the Celebration Roast, gravy, stuffing, and Brussels sprouts with pearl onions and chestnuts.

Stuffing is one of the few times I miss meat, to be honest. Not because of the whole “cooking it in the turkey” thing, since I didn’t grow up with that – my family stuffing was a potato/sausage dish that we cooked on the side. It’s more that there’s a certain umami/unctuous/savory/richness that I can’t seem to coax out of vegetables or meat substitutes. I definitely have my share of liquid smoke, soy sauce, and Maggi seasonings, though! But I get around that somewhat with the gravy that I make and ladle over Celebration Roast slices and stuffing.

If you have additional time, deeply caramelize an onion over slow heat and add it to the gravy, then puree the gravy in a blender – it’ll give the gravy a much richer flavor. However, the quick gravy below is delicious as is.

The stuffing components can be substituted with other breads, fruits, and nuts: sourdough, cornbread, dried apricots, cranberries, pears, walnuts, pine nuts, Brazil nuts. Sourdough, dried apricots, and pine nuts would be an especially delicious combination – I may try that this year! 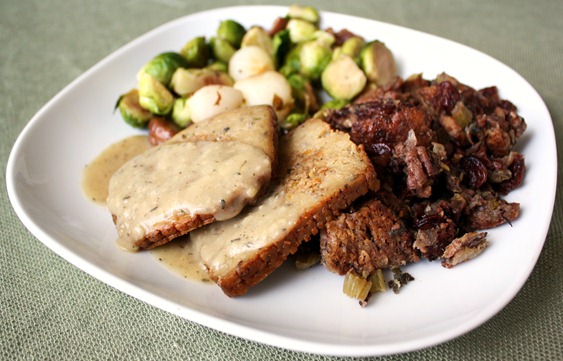 The day before: cube both loaves of bread and spread over a large baking sheet. Leave overnight to stale. If made the day of, place the cubed bread in a 200 F oven for 20 minutes or until dried out.

Heat butter in a large skillet over medium heat. Add the celery, onion, and garlic and sprinkle with salt. Cook for 10 minutes. Add sage, thyme, tarragon, and pecans, and cook for an additional 5 minutes. Turn off heat, stir in cherries, and let mixture cool. Stir in salt and pepper to taste.

Pour stuffing mixture into baking dish and cover. Bake for 30 minutes. Remove cover and bake for an additional 15 minutes or until browned.

Heat butter in a small saucepan over medium heat until melted. Quickly whisk in flour and let cook for 1 minute. While whisking continually, slowly pour in liquid mixture. Turn heat to medium high, bring to a boil, then return to medium.

Note: if the gravy ends up lumpy, it’s easily fixed. Either use an immersion/stick blender in the saucepan, or move the gravy to a blender and very carefully blend. This will remove lumps and make the gravy smooth. This will work for any lumpy gravy!